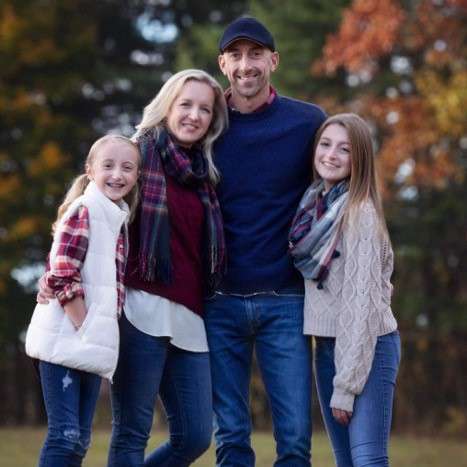 We met Lindsay in June when we learned that Find The Cause would benefit from a wonderfully successful fundraiser she and her husband took on at a time when they felt particularly helpless. Grateful and struck by Lindsay’s generosity of spirit and braveness in the face of being diagnosed with breast cancer in the midst of a pandemic, we felt inspired to share her story.

FTC: Tell us about your diagnosis?
Lindsay: I have had issues with my breasts for over 20 years with extremely dense breast tissue, many cysts which have needed biopsies, aspiration and one cyst removal via surgery. I also was constantly called back after mammogram for further films and/or ultrasound. Due to this, I have had annual mammograms since my 30s. With my most recent mammogram in February, a new cyst was discovered in my left breast and calcifications in my right breast, which were not present in my prior mammogram last year. The doctor was concerned about both, in particular the cluster formation of the calcifications in my right breast and ordered a ultrasound-guided needle biopsy for the cyst in my left and a stereotactic biopsy for the calcifications in my right breast. I was ultimately diagnosed with DCIS breast cancer, grade II, ER/PR+.

FTC: You chose a very aggressive treatment plan, which must have been a very difficult decision. Tell us about that.
Lindsay: To be honest, I very quickly made the decision to have bilateral mastectomy and was so grateful my surgeon and full oncologist team supported my decision. I have dealt with breast issues for so many years. I constantly felt like a “ticking time bomb” and that it was only a matter of time before one of my many biopsies would come up positive for breast cancer. Once I was called back for the biopsies in both breasts, even before the diagnosis, I was considering exploring bilateral mastectomy because I just didn’t want to deal with the stress and anxiety of the constant issues and testing anymore. When I received the diagnosis, I knew right away bilateral mastectomy was the path I wanted to take to ensure the best possible outcome from surgery/treatment and reduce the risk of recurrence as much as possible. I’m young and wanted to have the best possible chance of hitting this head on, getting through it and putting it behind me. Having gone through all of this – bilateral mastectomy with reconstruction/implants – and with the outcome I have received, I am so thankful I made the decision I did and wouldn’t have done it any differently.

FTC: You were diagnosed at a very difficult time. Tell us about that.
Lindsay: A breast cancer diagnosis during normal times I’m sure can be difficult enough to absorb, process mentally, determine treatment path, etc. To be diagnosed during the start of a global pandemic for COVID-19 and start down the path of planning for surgery, only to be told I needed to hold for 3+ months for surgery, was very unnerving. When I was told that surgeries of this type were being paused nationwide, I was probably about two weeks out from surgery and was already mentally preparing for that. I struggled with being told I was on hold with no accurate estimate of when surgeries would start back up again. In addition, I was prescribed Tamoxifen to try to keep the growth of the cancer at bay while waiting for surgery. That in particular was a challenge for me to grapple with, as it wasn’t part of my initial treatment plan and wasn’t a typical treatment for someone BEFORE surgery.

FTC: Tell us about that 3 month period of time while you waited for a date for your surgery.
Lindsay: I struggled being on hold with no certain answers of when I could have surgery and go into battle against my cancer. I was on Tamoxifen, which I didn’t have the greatest experience with in terms of side effects, and my mood was affected either from the meds, the uncertainty of if the cancer was growing inside of me…or perhaps a mixture of both. I have always been someone who sees a challenge, builds a plan and executes against it. In this situation, I felt helpless in my battle, which was a very uncomfortable place for me. I needed something that kept me from wallowing in pity of my diagnosis and instead wanted to focus my efforts towards something more positive. My husband, who after a 7-year battle had lost his father to colorectal cancer the week before my diagnosis, was also struggling with feeling helpless, so he and I came up with the idea of the t-shirt fundraiser to redirect our focus and give back. We chose two local breast cancer organizations to raise money for and set to designing the t-shirts. Frankly, it was a wonderful distraction from everything we were going through in the midst of pandemic, grief for loss of his father, and my diagnosis and allowed us to feel like we were DOING something, not just allowing this to happen to me (us). The response to the t-shirts was overwhelming and we are so grateful we could make an impact on something during this crazy and awful time. During the hold for surgery, I was hesitant to share my story; I didn’t have many answers to all the questions I had on my diagnosis and treatment and was too difficult to not have answers for others I told. The fundraiser allowed me to share my story in a way that made it about others battling this terrible disease who I could help, not just about me. However at the same time, it allowed me to see the army of supporters of family, friends and even perfect strangers who were behind me in my battle. So many people relayed stories of how they themselves, friends or relatives had battled breast cancer and wanted to support me along with our chosen charities, funding research for causes of breast cancer and support services for those battling. For me, it helped put a positive spin on my situation and showed me the army I had behind me as I went into my own battle. By the time I was finally scheduled for surgery in mid-June, I was mentally and physically ready to kick some butt! 🙂

FTC: Why did you choose Find The Cause to benefit from the t-shirt fundraiser?
Lindsay: Because I’m relatively young diagnosed with breast cancer with no family history or genetic indicators, it’s likely that environmental factors led to my breast cancer. Find The Cause appealed to me because it’s based in Massachusetts, serving the local community, and is funding research into possible causes or environmental factors of breast cancer like mine. I have two daughters who I will have to worry about from this day forward being susceptible to this disease, and I love that Find The Cause funds the research but also does prevention education as they discover and learn more about the causes of breast cancer. 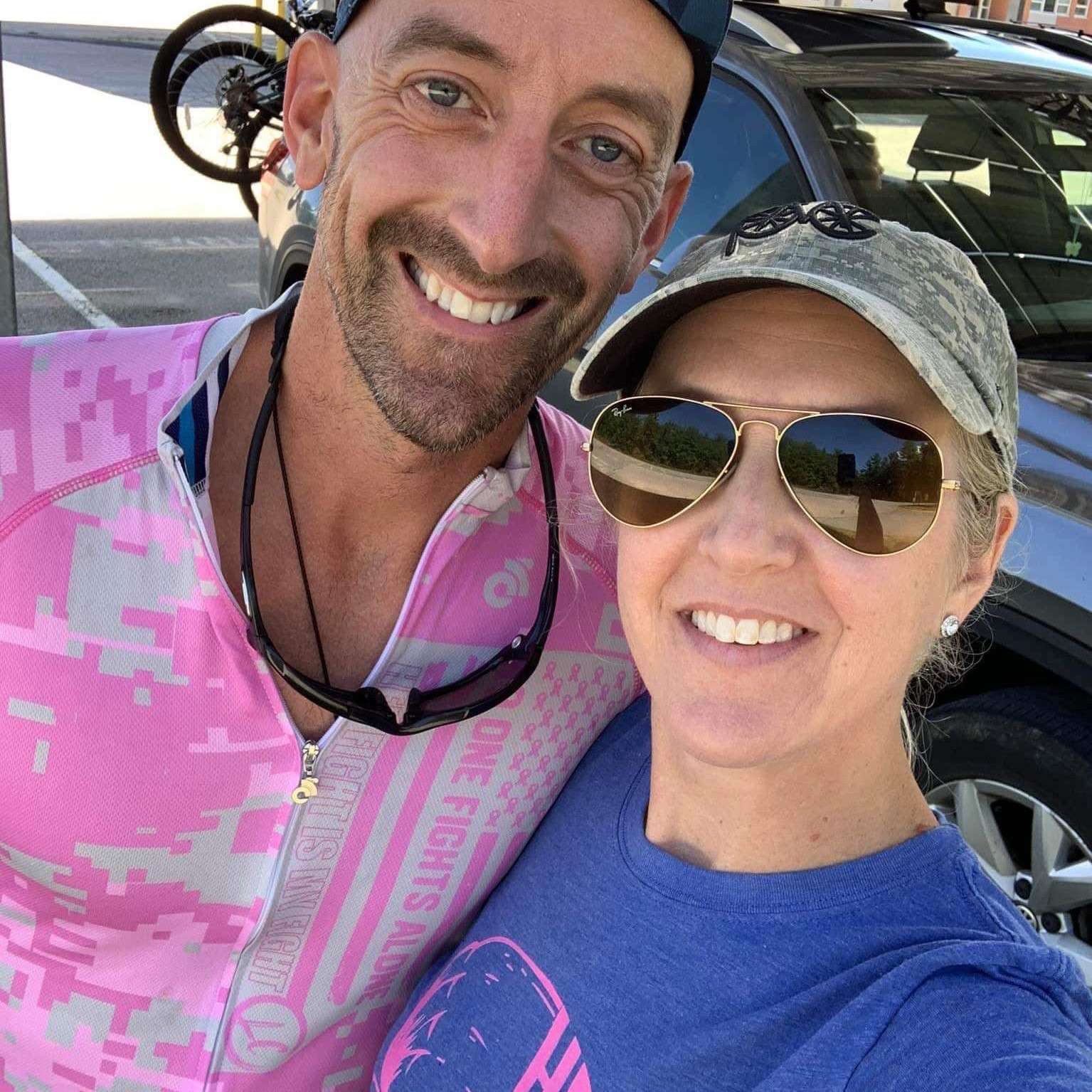 FTC: Were you able to see your doctor during the pandemic? If so, what protocols were in place due to coronavirus- could a loved one accompany you or did you have to go alone?
Lindsay: Most of my doctor’s appointments during the pandemic were telehealth (phone call or video call) appointments. I did have an in-person consult with the plastic surgeon who would be doing my reconstruction, to which I had to go by myself because only patients were allowed in the building. I wore a mask provided by the office that I put on in front of them at the entrance and used hand sanitizer upon entering and leaving. My oncology surgeon was excellent about scheduling regular telehealth appointments to check in on me, give me any updates she had, etc. When I finally was able to have my surgery in June, I did have to get a saliva COVID test 2 days prior to surgery at a drive-thru testing clinic at the hospital parking lot. On surgery day, my family had to drop me off at the front door of the hospital and hug me goodbye. My husband was later allowed into the hospital to visit but only after surgery was done and I was in my hospital room. He had to wear a mask the whole time along with all of the hospital staff. Patients did not need to wear a mask.

FTC: How are you doing today and what is your prognosis?
Lindsay: I am SO grateful to say that following bilateral mastectomy and reconstruction, I am cancer free and do not need to have any after treatment such as chemo, radiation or even hormone-suppressant medication. My chance of recurrence is very low, which is so powerful from a mental perspective for me – I don’t feel like I have a black cloud hovering over my head, constantly worried about going through diagnosis or treatment again. I am so thankful to my oncology and surgical team, whose support and care made such a difference in how we navigated through the diagnosis and treatment during an unprecedented pandemic.  The aggressive treatment path I chose paid off for me as well (or better) than I could have ever hoped, and I wouldn’t change my decision for anything.